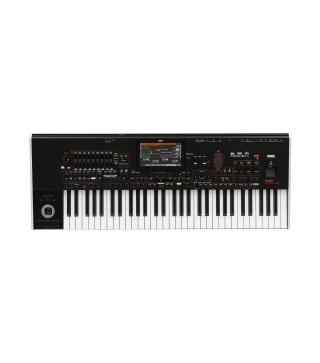 Produce and Perform with Outstanding Sound

Perform solo sets with a complete backing band, and write music as fast as your creativity allows, with the Korg Pa4X-76 Arranger keyboard. Korg's Pa series of arrangers are the first choice of countless composers, and the fourth generation Pa4X-76 gives you more sounds, musical styles, and studio-quality effects than ever. And from capturing your first musical ideas to performing on stage, the large 7" touchscreen makes it easy to load songs, navigate the SoundBook music database, manage sounds, and tweak effects. For an arranger keyboard that enables your creativity rather than limits it, you'll be well-served with the Korg Pa4X-76.

The Pa4X-76 uses Korg's Enhanced Definition Synthesis-eXpanded (EDS-X) sound engine to deliver the most nuanced, detailed instrument sounds ever heard in the Pa series. The updated PCM sound set in the Pa4X-76 occupies 10 times the capacity of the previous generation, allowing for highly detailed and realistic guitars, pianos, strings, and other complex sounds. There's a lot to explore in the Pa4X-76, with over 1,500 factory sounds and the ability to tweak and save hundreds of your own.

Using the Pa4X-76's three assignable switches, its four-way joystick, or the ribbon strip, you can tap into Korg's Defined Nuance Control (DNC) to add realism to your performances. Thanks to DNC you can make sax solos growl, mimic changing embouchure of a trumpet, add breath sounds to harmonica, and much more. When it comes to re-creating the nuances of a real performer, Defined Nuance Control produces impressive results.

From blues and jazz to Latin, pop, flamenco, and beyond, the Korg Pa4X-76 is ready to guide your next songwriting session. Over 500 musical styles are included, each with intros, variations, breaks, fill-ins, endings, and even count-ins. You can program your own riffs and phrases, customize the existing ones, and even make your own new styles.

Chord Sequencer allows you to take inspiration and run with it

When you come up with an inspiring chord progression, use the Chord Sequencer function to quickly record it and loop it while you play over the top of it. It's great for practice and can also give you more performance options when playing live. Even better, you can save these chord sequences for easy recall later on.

Outstanding effects to take your sounds over the top

The Korg Pa4X-76 has all the studio-quality effects and processors you need to produce truly polished sound. In all there are over 140 effects including reverb, delay, stompbox emulations, amp and cabinet simulators, EQ, and the Waves MAXX AUDIO suite. The TC Helicon Voice Processor creates outstanding harmony voices and special effects. And the Adaptive Mic Setting monitors the input signal and adjusts various processors to optimize your sound - it's like having a sound engineer mix your vocals in real time. In other words, the Korg Pa4X-76 has everything you need to make good tracks sound outstanding.

From production to performance, the Korg Pa4X-76 has what you need!

Musicians Avenue! Established in 1996, has evolved to cater for all aspects of the music industry ranging from P.A Systems, Studio Products and DJ Gear to Guitars, Keyboards, Amplifiers, Drums and Percussion. Musicians Avenue remains a family owned store and continues to provide good old fashioned customer service. We also do repairs and maintenance on all musical instruments.
Facebook Twitter